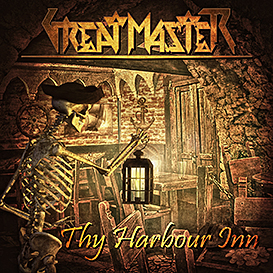 THY HARBOR INN is the fifth album by the Epic-Power metal band Great Master.
This latest studio production wants to be an anthological album with a collection of historical and traditional seafaring songs of the anglo-saxon maritime culture (shanties), reinterpreted and rearranged in the style of the band, the album is placed after the success of Skull and Bones (tales from over the seas), which has collected many positive reviews from critics and audiences, as the conclusion of the narrative piratical themes parenthesis of the band.
Mixed and mastered by Simone Mularoni at Domination Studio.
Artwork by Jahn Vision Art.