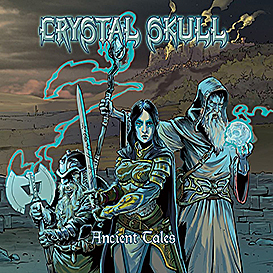 “Ancient Tales” was born as the first of three chapters of a fantasy concept, where, through 9 songs, we will discover glimpses of an untold story featuring three fearless adventurers in a ruined world devastated by the horrible invasions of the dark legions.

All the artwork on the album was done by the magical pencil of Fabio Babich, an appreciated cartoonist of the “Dragonero” comic book by Sergio Bonelli Editore, who has masterfully managed to bring back the atmospheres and stories of the songs on paper.

First edition will be released in a deluxe 6-panel digipack CD, and later it will also be available in other formats, in a limited edition for collectors.