Home Great Master – Skull And Bones – Tales From Over The Sea

Great Master – Skull And Bones – Tales From Over The Sea 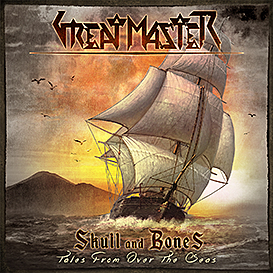 “Skull And Bones” is a concept album with 11 tracks that tells the story of piracy and the events that preceded the novel by Robert Louis Stevenson, “Treasure Island”, as in the TV series “Black Sails”, Citing historical figures such as Blackbeard, Calico Jack and characters from the novel like Flint and Long John Silver.

The album, mixed and mastered by Simone Mularoni  at “Domination Studios” of San Marino, will be published in an exclusive elegant digipak package and  in a Deluxe Boxset, “The Treasure Chest” limited edition handly numbered, unmissable work for fans.

New album, new line up and debut of the new voice of Great Master Stefano Sbrignadello and bassist Massimo David with the rest of the crew, Jahn Carlini and Manuel Menin on guitars, Giorgio Peccenini on keyboards and Massimo Penzo on drums.

The artwork is realized by Jahn Vision Art taken from the work of the American artist James Gale Tyler.